About the Film – Man takes his daily stroll down the street and meets a frog. A staring contest ensues…
CG Maya.

About Emmy – Hello my name is Emmy Castelain, I am half French, half Belgian and I studied animation in Brussels for two years before I came to finish my bachelor in Newport, Wales. I learned Maya by making my own short film and will be looking for CG animation jobs in the future as well as CG Modeling jobs to further improve my skills. I’m also crafty with a pencil. I am passionate about animation and storytelling.

About the Film – David tells the story of a boy who hides away at night to avoid his achoholic father.
CG Maya.

About Stephen – I’m a CG animator hoping to enter the industry as a junior animator. After working ten years in the “real world” fitting blind and curtains, I came to the decision that now was the time to follow my dreams of becoming an animator. I love the freedom that animation has provided me to tell the stories I want, the way I want. Despite a happy childhood my films tend to linger on the darker side of life, It seems I’m incapable of making a happy film, I blame the news.

About the Film – What happens when dreams move freely? A little story on a little dream’s journey.
CG Cinema 4D/After Effects. 2mins17

About Ashley – Quirky CG animator and graphic designer who just loves creating an image which looks as visually pleasing as possible.

About the Film – Whilst coming to terms with the loss of his father, a small boy loses his most cherished memory. He must go on a journey of discovery to find it,which will eventually allow him to move on.
CG Maya. 2mins54

About Stacie – Stacie is a CG animator with an interest in entering the games industry. During her second year, she was lucky enough to get an animation internship at Lionhead Studios, which lasted eleven months. She grew significantly, in both her skills and experience in animation and motion editing, and herself. In her spare time, Stacie enjoys playing video games, reading comics and listening to obscure music. 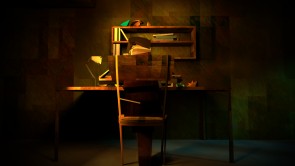 About the Film – ‘Blocked’ is an instance from a young boy’s life who is suffering from a medical condition.
CG Maya. 1min43

About Tharun – Technically, I am a CG animator trained in Maya. But, I want to enter the visual effects industry as a compositor and work my way up the ladder learning other techniques and areas which I have not explored. Although I stray more towards the ‘realistic’ side in terms of the industry I’m into, I believe in simple non realistic style of representation.